Optical measurements for Total Suspended Solids monitoring have been available for many years and are used in many water, wastewater, and industrial settings. However, did you know that…

TSS monitoring is essential for controlling many industrial processes, especially in Wastewater Treatment plants when an understanding of the solids load and solids movement around the plant is essential to efficient plant outcomes.

The standard method of gravimetric sampling (passing a known volume of TSS containing water through a filter, then drying the filter and measuring the weight gain to give a measure of mass/volume – TSS) is slow and cumbersome and subject to errors, e.g. sampling errors. What is needed is a device that can measure the TSS continuously and online.

The most common devices are based on the measurement of the optical properties of the sample, commonly backscatter. 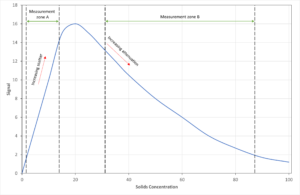 There are some fundamental problems with using backscatter to measure TSS. The first is the range that a sensor can measure over. This is largely determined by the path length of the sensor. The longer the path length, the greater the sensitivity but the smaller the range.

This is because as solids increase, the backscatter (signal) increases but so does the attenuation (blocking) of the light until their effect is equal (the ‘hump’) after which attenuation increases until the signal is zero.

For most manufacturers, the solution is to quite tightly define the range at which the sensor can operate. Pi’s SoliSense® uses two detectors of different path lengths to measure the widest possible range of TSS in a single sensor.

Using multiple emitter intensities allows for no zero, and the elimination of the effects of ambient light 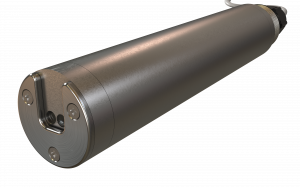 Each time the SoliSense® takes a measurement it isn’t simply measuring the amount of backscattered light (which includes an element of ambient light). It changes the amount of light emitted to 25%, 50%, 75% and 100%. From there it records a gradient for each sample point. As it does this very quickly it can be assumed that the ambient light is constant and is therefore absent from the gradient (compensated out). In addition, doing this during a calibration allows the SoliSense® to back calibrate any zero offsets and remove these. This capability is patented by Pi and is unique in the marketplace.

The SoliSense® from Pi uses patented technology to

All of which means that the SoliSense® is an extremely effective technology for continuously measuring Total Suspended Solids in industrial and municipal wastewater treatment plants.